Former CIA Officer Jason Hanson explains…
How to Protect Yourself from
Becoming a “Victim of the Dark”
A violent crime happens every 26.3 seconds, and MOST occur at night. Here’s the one thing you must know to avoid joining this statistic.
[Dateline: Friday, 4:32p.m.]

She could be your wife… daughter… or granddaughter.

Megan works nights… and headed out one day at 3:30a.m.

Unbeknownst to her, five days prior, a violent criminal had been released from prison.

And within the next few minutes, she encountered this man… perched on top of a concrete block – cat-like – waiting for his prey.

As she made her way past him… she heard him scoot off the concrete to begin following her.

With no way to defend herself – she knew she was in serious trouble – so she started to run.

Unfortunately, he caught up with her, grabbed her and threw her over a fence into a cemetery.

What Happened During
The Next Few Moments Would
Forever Change Her Life.

The man, fueled by meth and alcohol, took her to a dark corner of the cemetery and brutally assaulted her.

The last thing she remembered before blacking out was his hand grasping her throat while he whispered, “You’re going to die!”

Eventually, she woke up in the cemetery… barely alive.

She Lived.
But Because This Event Constantly Cycles In Her Mind.
Death Grips Her Every Single Day.

Hi, my name is Jason Hanson and I’m a former CIA Officer.

I share this horrific story with you, not to scare you, or make you sick to your stomach…

But as a husband and father of two daughters, to empower you.

So that if you ever find yourself being followed by a crazed maniac – you, or your loved ones won’t suffer the same fate as the woman above.

But, before I go on, I need to share another story. A personal story that involves me, my wife, and…

My Least Favorite
City In The World

“This city averages a murder a day”, I thought to myself as my wife and I strolled up to the crosswalk of a busy downtown street.

In fact, the thought grips my mind every time I find myself in this town.

The facts speak for themselves.

And this was just the 2015 statistics.

So, to say I was on “high alert” as we approached this busy crosswalk is an understatement.

And as I glanced around, I saw a few people...

Yet one man became my focus.

It was his constant staring in my direction, as well as crossing the street several times that made me lock onto him.

As we were waiting for the light to change to cross the street, he ended up standing next to me.

My Instinct Kicked In
As I Now Considered
Him A Threat.

Keeping my composure… I watched his every move.

As we stepped off the sidewalk, I deliberately took baby steps with the hopes he’d dart across.

He matched me stride for stride.

Because I didn’t want this to go any further, I did something most wouldn’t – I turned… looked him dead in the eyes… and confronted him.

“Excuse me, do you know what time it is?”

With a blank stare on his face, I asked a second time, “Excuse me, do you know what time it is?”

He muttered the time… I could barely understand him.

Instantly, he knew I was on to him…

And it was in this moment, I knew without a shadow of doubt, he was on to me.

I knew this because he turned the other direction and walked away.

The confrontation worked… I stopped his likely plan of attack.

As a former CIA Officer, I can tell you that a spy won’t live very long if they don’t master this skill.

Without it, you’re playing with fire – publicly displaying you’re an open target.

You see, predators watch everyone.

They stalk their prey and wait for them to get distracted so they can pounce.

People walking around on their cell phones are obvious potential victims – and as smart phones demand so much of everyone’s time – there’s plenty of people to choose from.

Criminals act on desperation and they’ll do just about anything, at any time, to get what they want.

But it’s not enough to just have Survival Intelligence.

You need to master the key component.

Always Watching And
Reacting To Everything

Simply keeping your eyes open, your head on a swivel, and reacting to even the slightest discomfort can keep you alive.

Now, if I’d been on my cell phone checking Facebook during our walk in Baltimore City…

Or dreaming about how our day would go…

Or simply not paying attention…

Who knows what could’ve happened.

The last thing I wanted for me, my wife – or both – was to be a number in the violent statistics of Baltimore City.

Unfortunately, not everyone is so lucky…

Which leads me to the problem…

You Can’t Watch
What You Can’t See

Yet so many people still put themselves in harm’s way, due to the simple fact they can’t see their surroundings.

When you can’t see your surroundings, you can’t react.

And when you can’t react… you could get seriously injured.

One minute you think you’re safe… then without warning, a situation can turn from safe to terrifying – turning you not only into a victim, but the top news story of the day.

For instance, three people were recently robbed at gunpoint just after midnight in a Baltimore County suburb…

They thought they were safe, but because they couldn’t see their surroundings they got robbed by two suspects lurking in the shadows.

What were they doing?

Playing Pokémon Go on their phones.

I know that sounds ridiculous, but the Baltimore County police spokesman said in a statement…

“The game itself is harmless. But what concerns us the most are the same things that concern us with texting… You don’t want to pay so much attention to the game, that you put yourself into a dangerous situation.”
The bottom line is, we all know criminals love to hide.

They duck down between cars… hide behind pillars and large trees… and wear dark clothes to blend into the night.

According to the Bureau of Justice’s National Crime Victimization Survey, 63.2% of rapes, and 71.7% of motor vehicle theft happen at night…

And 40% of all total rapes and assaults take place in parking garages where it’s typically dark during any hour of the day.

A few years ago, a woman was carjacked and murdered by a crazed man in a parking garage.

Nkosi Thandiwe said he walked up to the woman’s car as she sat completely unaware, told her to get out, then shot her in the back of the neck when she tried running.

When asked in court why he did it, he simply said, “I don’t know.”

As you can see, crimes committed in the dark are often a matter of life and death.

Which is why I highly recommend you not only do your best to stay in A.W.A.R.E. mode, but to also carry a simple item that can deter your predator…

Giving you enough time to get away… while helping save you from your worst nightmare.

What I’m referring to is a high-powered tactical flashlight.

But not just any tactical flashlight…

You need one you can bet your life on… the one I trust for myself, my wife, and other members of my family.

After all, during my time in the CIA, I know what it’s like to have a flashlight in my hand, having to count on it time and time again.

And even though I’m no longer with the Agency…

The last thing I want to do is send my wife out, without the ability to see in the dark, putting her in harm’s way.

This is why I went to great lengths to team up with brilliant engineers to create what I call, “The World’s Toughest Flashlight.”

And no, that’s not some cute slogan made up by guys on Madison Avenue who’ve never been in the trenches with a flashlight.

The flashlight we created is called the SPYTAC X-6 and is designed for espionage and military special operations to operate in the harshest conditions on earth. 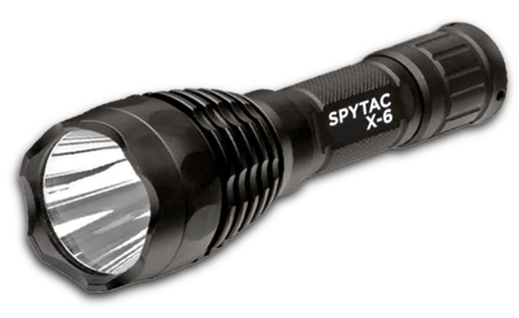 With the SPYTAC X-6, you can…
If ever there was a tool you could use to get yourself out of a dicey situation in the dark… it’s this flashlight.

Whether you need to light someone up– or use it when the power goes out– the last thing you want is a flashlight that fails when you need it most.

Nothing can get through. 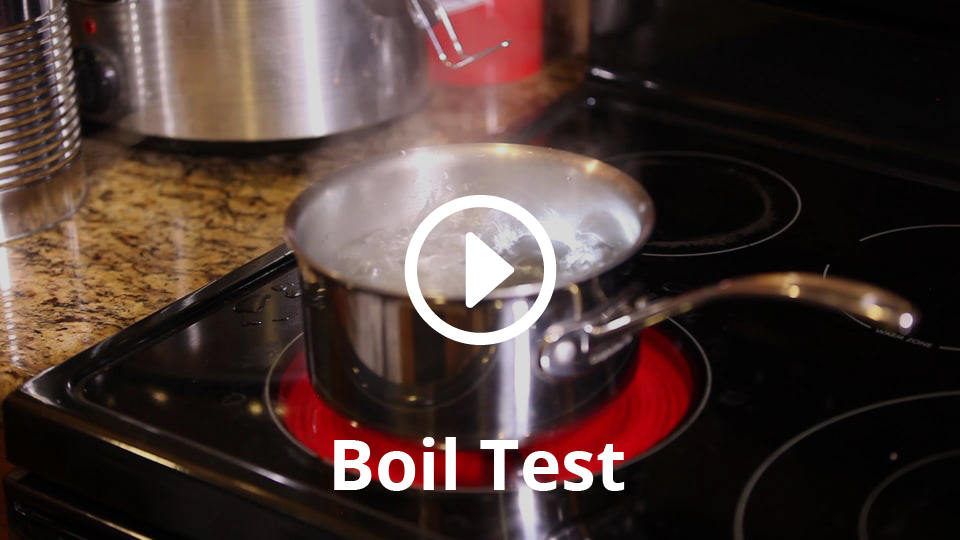 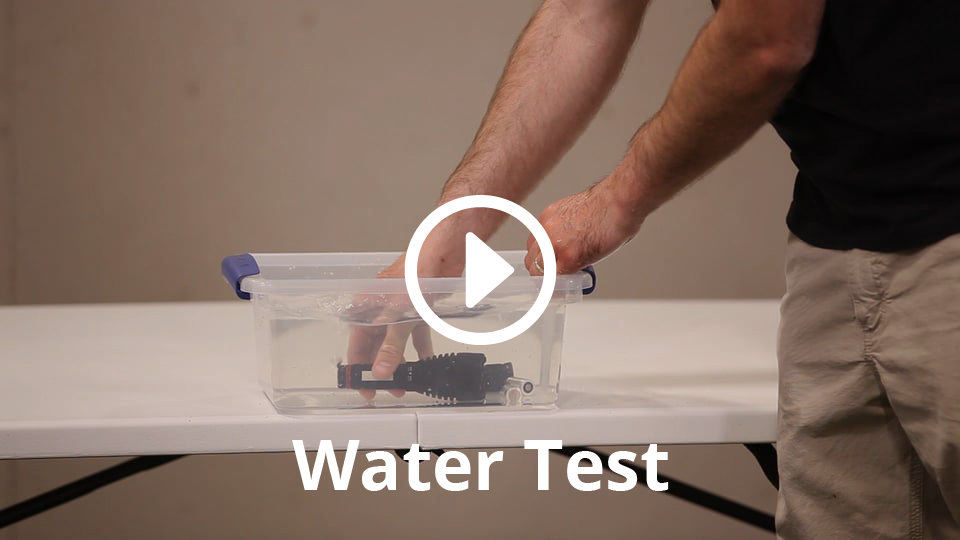 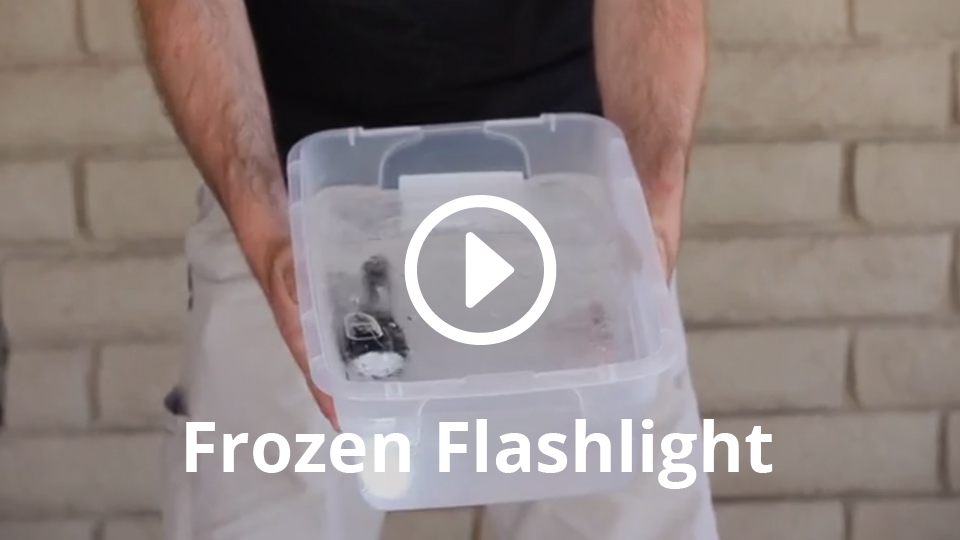 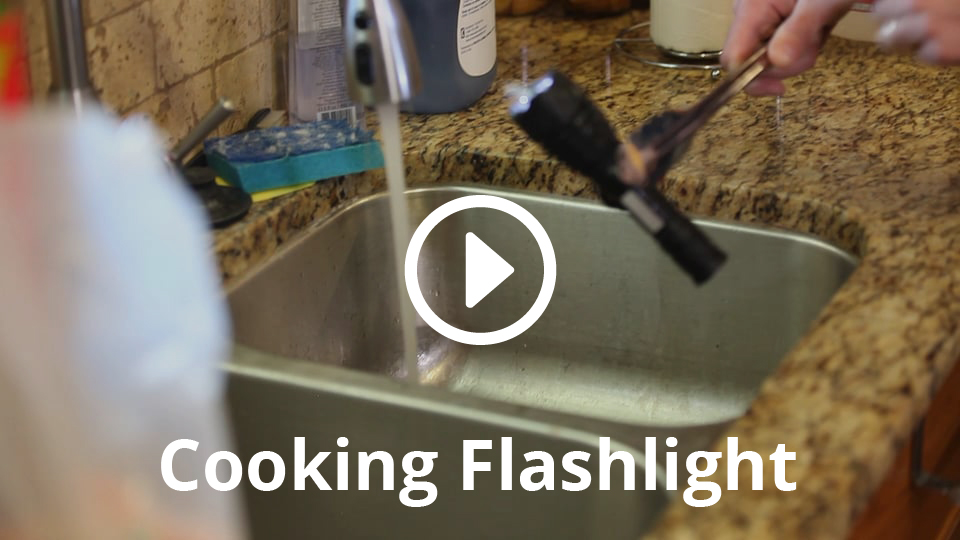 As you can see from the videos above…

Not only is the SPYTAC X-6 able to be frozen in a block of ice, but the hard-coated exterior allows for heat resistance of hundreds of degrees.

Even If That
Life Is Your Own.

You can also use it to break just about anything…which is something an attacker wouldn’t enjoy if you absolutely had to use it in that way.

Take a look at the window and coconut videos below… 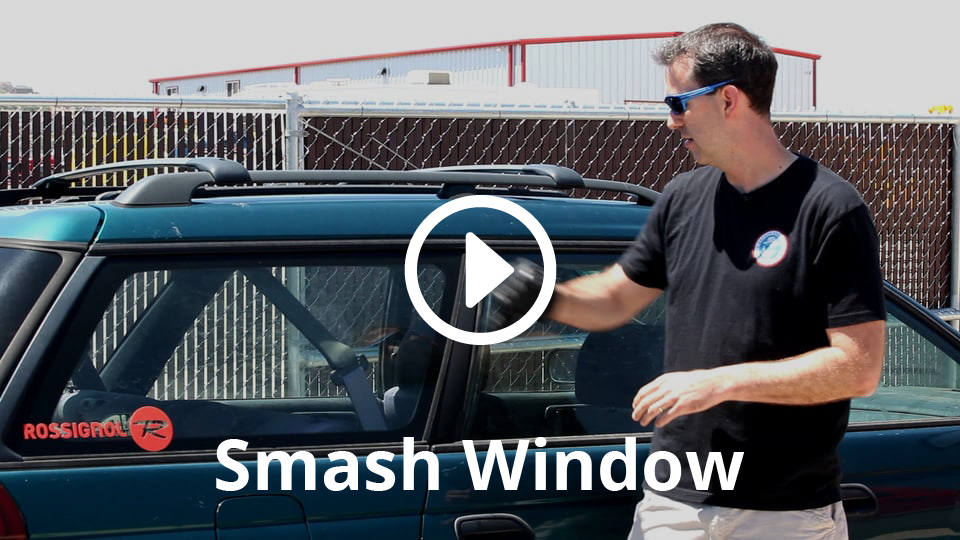 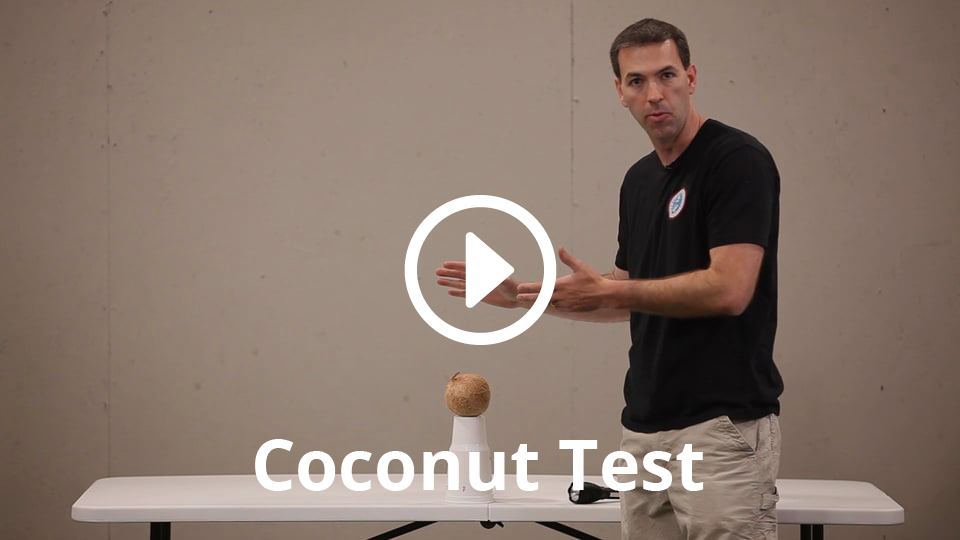 Because it’s made with an extra thick, tri-cut, shatter and chemical resistant lens… you’ll never have to worry about breaking, damaging, or even scratching it.

And as you can see… plastic isn’t in our vocabulary.

The fact is, most lenses are made with plastic or a plastic variant, and they’ll discolor and become distorted upon contact with substances like DEET (which is in most mosquito repellents used for hiking)…

But DEET won’t do any damage to the lens or body of the SPYTAC X-6.

And since the body is made from Mil-Spec 6061 aircraft aluminum, it can take a beating… 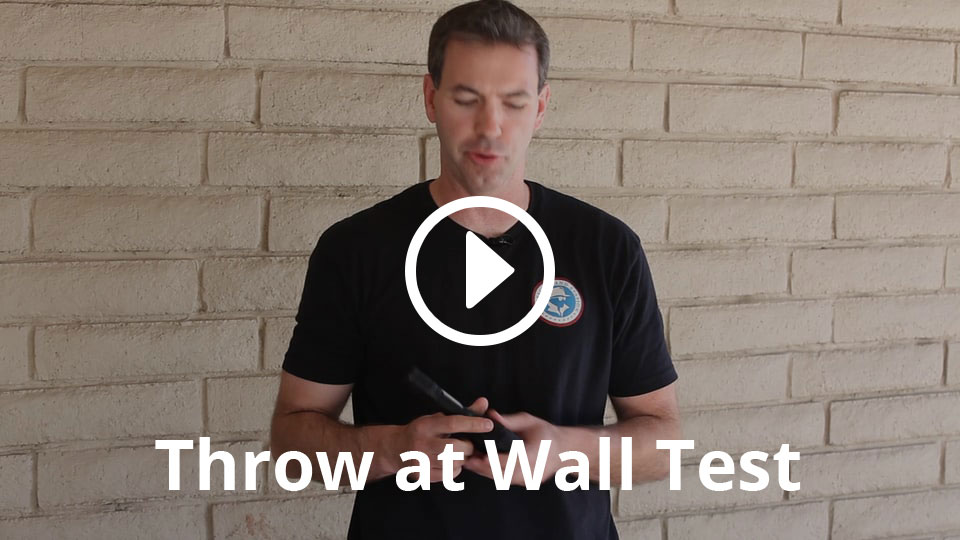 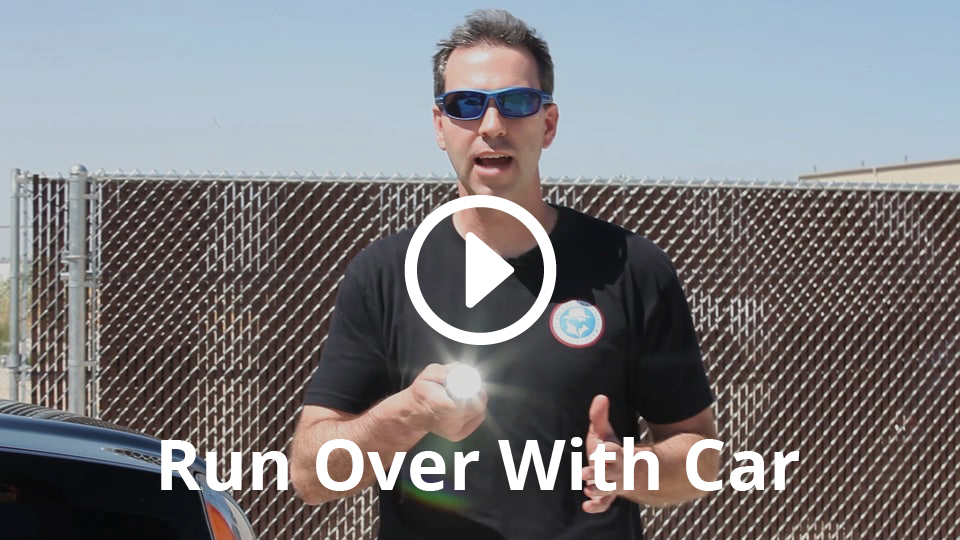 And don’t forget about the nearly indestructible bezel. 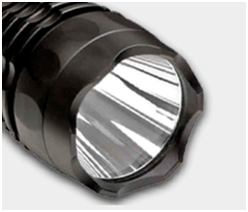 In a self-defense situation, this bezel will do serious damage if you’re forced to strike an attacker with the flashlight…

Which Is Exactly What
You Want When Confronted
By A Potential Attacker.

Truth be told, most people who are victimized never imagined the crime would happen to them.

They rest with the stigma, “It always happens to the other person.”

But in today’s world, it can happen to anybody…

And because of that, I wouldn’t take any chances and I would make sure you own a quality tactical flashlight.

You could go out and spend $400 or more on a flashlight that won’t even come close to the SPYTAC X-6.

In fact, the SPYTAC X-6 is less than half of that amount and I wouldn’t hesitate for a second putting it up against those super expensive lights.

Best of all, there are several battery options for this light. You can use two CR123 batteries or one rechargeable 18650 battery for your SPYTAC X-6.

Because I fully believe there isn’t a better light on the market, I stand by this light with a full 365-day, 100% Money Back Guarantee.

If for any reason (or no reason at all), you don’t think the SPYTAC X-6 is worth every penny, just send back the flashlight and I’ll give you a prompt and courteous refund.

But I will ask you three right now…

What if the woman I told about earlier was your wife?

The price of a life is far more valuable than anything we could ever spend to help save it.

The SPYTAC X-6 is a light above the call of duty to keep you and your loved ones safe… The highest quality and best performing flashlight you’ll ever use.

Know you can trust your life with the SPYTAC X-6.

Click on the yellow button below to get your own SPYTAC X-6 today.

Because this is a custom flashlight built for me and my team, we do limited runs of this light.

And currently, we only have about 800 of these flashlights in our warehouse.

It takes us 120 days to get these produced because of the high level of quality…so make sure you claim one today so you don’t have to wait months to protect yourself.